I have been playing the drums for over 30 years. I first became interested when I was about 6 years old, watching my Dad play. It was an instrument that I naturally took to and found myself experimenting for hours on end on his kit. When I was 12 I enrolled in formal tuition with Bill Scott, a successful drummer and well known teacher. Whilst working for the BBC and recording for adverts, Bill also toured extensively across Europe with bands, inspiring me to follow in his footsteps and make a career out of drumming.

I spent 7 years learning from Bill, working to Grade 8, learning to read charts, rudiments, and generally everything I needed to set me up as a professional drummer.

I joined the school band at 14yrs old, which gave me a good grounding in all aspects of rehearsing, reading, live performance and interacting with other musicians. Around the same time I started drumming with a local band of professional musicians, recording albums and playing in pubs and clubs all over the UK (all before I was 18!)

I soon became an established drummer in the area and was frequently asked to dep for other local drummers, gaining valuable experience in all styles, including rock, jazz and Latin, as well as becoming more involved in the recording studio, working with a local producer. I recorded sessions for bands he was producing, and also songs and jingles he would sell to record production companies for use on television and radio (many of which I still find popping up on iTunes today!)

Since then I have played in numerous bands, musical shows and productions, touring Europe and recording albums back in the studio.

In the '90s I was part of a blues band called Grassroots, touring extensively around the UK, playing blues clubs and festivals. Regular guest players included Dick Heckstall-Smith (Alexis Corner/John Mayall, Colosseum, Bo Diddley), John O’Leary (Savoy Brown, Champion Jack Dupree, Mainsqueeze) and Dave ‘Munch’ Moore (Bo Diddley). During this time I also worked with Andy Taylor (Duran Duran) and played in some of the biggest venues in the country.

More recently I have worked with Darren Hodson and The Southern Companion, recording the album 'Short Stories and Tall Tales' which was released in August 2011 and played drums for platinum selling singer/songwriter Rumer in her Homecoming Concert.

I always believe you can keep improving whatever level you're at. I have had, and still take lessons from some of the best drummers in the world including Steve White, Stanton Moore, Geoff Dugmore, Jason Bowld, Pete Cater, Jojo Mayer, Billy Ward and Thomas Lang.

About 20 years ago, I was approached by a fellow drum enthusiast about lessons, and decided to give it a go. I really enjoyed this side of things and found it to be quite inspiring for my own playing and creativity (and still do). I began to get a lot of enquiries for lessons and soon found myself running a successful teaching practice.

I mainly teach private students but I also have a couple of schools I teach at each week. In 2003 I set up a drum kit tuition programme at a local music centre and taught there myself for 18 months. But, for me, I think you get the best results when teaching privately, one to one.

In 2014 I teamed up with well known UK teacher Mike Dolbear, to run his affiliated drum school here in Bournemouth. I got to know Mike through my students success in his young drummer of the year competition. We have been running some great events here on the south coast including one day masterclasses with some of the top drummers in the world, including Stanton Moore, Chris Coleman & Jojo Mayer. I also taught two classes in the education zone at the 2014 London Drum Show for mikedolbear.com. And in August of 2015 I had an interview published in a special edition of Drummer magazine, all about education, called 'Improving with the Experts'. In 2016 I was back in the education zone at the London Drum Show teaching classes on groove foundation for both days of the event.

Some of my past students have gone on to play in signed bands, release albums and tour all over the UK and Europe, as well as perform in stage shows/musicals and all avenues of the music business. My student, Ben Clark, won The UK Young Drummer of the Year 2010 and also came 3rd in the Mapex Drummer of Tomorrow World Finals in Germany, where he was the youngest by 6 years!!

Following on from that my student Mike Braye made it to the top 40 in 2011 and Nathan Wallington was a finalist (top 10) in 2012 & 2013 after only 4 years of playing the drums! Since then I’ve had a number of students make it into the top 40 of the competition. 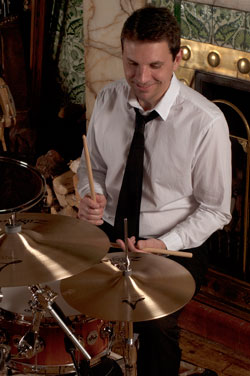 • Danny playing at the Rumer gig in New Milton December 2011.

• Danny playing drums for the Rumer Concert at Freshfields 2012.