Young Drummer of the Year

Young Drummer of The Year is an annual UK competition for drummers, aged 16 and under to participate in, run by Mike Dolbear. The finals take place in Leamington Spa and bring together the best talent of this age group in the country. It is a great competition which enables the winner to go on and experience what life is like as a professional drummer, taking part in clinics, other competitions, meeting the best drummers in the world and generally gaining massive exposure.

The entrants apply with a video of themselves performing a two minute drum solo. From over 500 entries, just forty applicants make it onto a shortlist to get reviewed by a panel of independent judges who then select the best ten drummers.

The top ten finalists then perform live in front of the judging panel and an audience to compete for the title of Young Drummer of The Year.

Mike Nicholls at Classic Drums in Bournemouth recommended my services to a young man from Lymington called Ben Clark. Ben was 16 and keen to enter Young Drummer of the Year 2010 as it was his last chance. He was looking for drum lessons with a teacher he felt could help him win it and together we worked hard to construct a drum solo to submit for the competition. Once we knew Ben had got into the top ten we worked on another two minute drum solo for the live finals. I’m pleased to say our hard work paid off and Ben blew the judges away and took the title!

This has inspired some of my other students to enter, in 2011 Mike Braye made it into the Top 40 and in 2012 & 2013 Nathan Wallington made it to the finals (Top 10) on both occasions. Since then I’ve had a number of students reach the top 40 in the competition.

After Ben had finished his year as Young Drummer of the Year, Mike Nicholls at Classic Drums decided it would be good to put on a Drum Clinic in Bournemouth with a top named drummer and to give Ben a support slot at the clinic. Robin Guy agreed to do the event which we were very pleased about as he is a great drummer/showman who also connects with the audience very well.

The event sold out with around 220 people. I helped Ben to put together a 15 minute drum solo which he used to wow the crowd and then Robin took to the stage to perform his unique and entertaining set. The day went so well that we have decided to put on another one soon, so watch this space for details!

”I would like to say that the feedback from Dan's students has been very good; his level of teaching and passion for drumming is very encouraging. Keep up the good work happy drumming all the best.’ 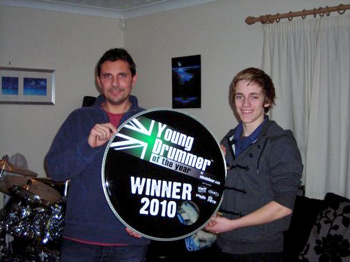